A machine to make a future Biotech chronicles 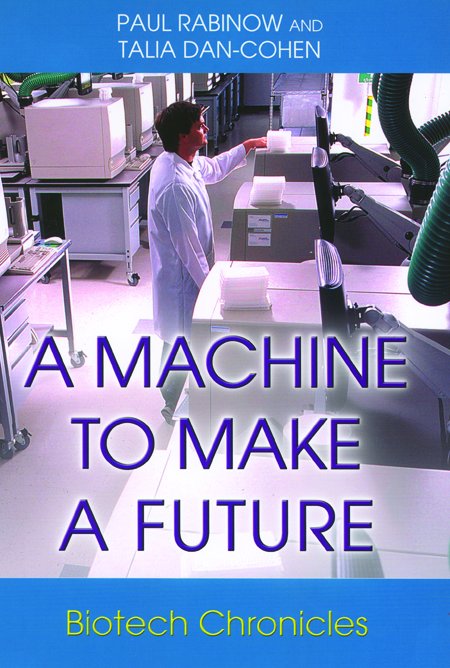 Celera Diagnostics was founded shortly after Celera Genomics completed its sequencing of the human genome and after the departure of its controversial genomic maverick J. Craig Venter. Its mission is to discover complex disease-associated single-nucleotide polymorphisms (SNPs) and validate their medical utility, then to advance its findings in the development of novel diagnostic products. If this venture is successful, it will enable prospective health risk evaluation and make targeted medicine possible in the future.

A machine to make a future by Paul Rabinow and Talia Dan-Cohen, a book as impressive as the previous two works in Rabinow’s biotechnology trilogy — French DNA: trouble in purgatory and Making PCR: a story of biotechnology — is an in-depth and well-constructed anthropological chronicle of this new Californian scientific enterprise. With his student Talia Dan-Cohen, Rabinow has provided a highly readable account of Celera Diagnostics’ formative period, which occurred largely during the summer of 2003, through a series of lengthy but insightful interviews with the original researchers.

The beginning chapters introduce the company’s prehistory, scientific vision, and business plan as well as its major players. Three key players, Tom White, Kathy Ordonez, and John Sninsky, formerly of Roche Molecular Systems, were recruited to found Celera Diagnostics, which was to focus on genomic diagnostics. From day one, Celera Diagnostics had “a very significant advantageous connection to Applied Biosystems, a hugely profitable business, and a synergy, however problematic and of questionable value, to Celera Genomics,” Venter’s previous sequencing company, which refocused from genomics to drug discovery after his departure.

One of the amazing and unexpected outcomes of the Human Genome Project is that humans were found to have only 30,000 genes rather than the previous, widely held estimate of 100,000 or even 150,000 genes. This change in our understanding of the genome profoundly shaped much of the Celera Diagnostics executives’ scientific vision and subsequent business strategy. This resulted in an ambitious intensification of whole-genome disease association studies. Since Celera Diagnostics’ mission was to “fish out” constellations of complex disease-causing SNPs and commercialize the knowledge into genetic diagnostic products, they could thus, to use Ordonez’s own words, “address the problem on a genome-wide basis” and “forget the fishhooks and the fishnets . . . just drain the lake and walk out there and pick up the fish.” The subsequently developed Applera Genomics Initiative, a $100 million project used to resequence 23,400 genes in 39 individuals and a chimp, secured Celera Diagnostics’ access to a novel functional SNP marker catalog not available elsewhere. This represented a pivotal preparatory step in the discovery of complex disease-causing SNPs. The combination of serendipitous timing with the postgenomic era, sufficient funding, a high-throughput SNP genotyping setup, and the Applera business environment laid down a solid foundation for Celera Diagnostics to perform disease-association studies on an unprecedented scale analogous to Celera Genomics’ genome-sequencing feat. Rabinow’s informative interviews with the company founders reveal these scientific and business opportunities in the dynamic contexts of contemporary genomics and Applera entrepreneurship.

The key challenges for disease association studies include experimental scale, cost of that scale, deliverable timeframe, and effective follow-up of initial genotype screening to pinpoint disease-causing genetic mutations. Chapter 2 provides a comprehensive and educational analysis of current genotyping approaches. In his interview, Sninsky claims that Celera Diagnostics’ gene-centric functional SNP scan is a more effective strategy for discovering the polygenic disease-causing SNPs than linkage, linkage disequilibrium, and haplotyping approaches. Although Sninsky “felt more comfortable criticizing an approach . . . than the companies or institutions behind it,” the reader will discern that Sninsky did not reserve his criticism against Eric Lander, another major genotyping player, and Lander’s HapMap Project strategy. This chronicle would have been more complete with the inclusion of the survey from the public International HapMap Consortium to provide additional input on the same provocative perspectives.

The next 3 chapters are less intellectually challenging to clinical researchers, as they focus on dissecting the efforts of Celera Diagnostics to construct its distinctive high-throughput facility and manage diverse relationships with pharmaceutical and biotech companies, government regulators, and academic researchers. Through reports of a series of frank discussions with internal project leaders and external domain experts, the last 2 chapters detail the scientific controversies surrounding the future medical utility of Celera Diagnostics’ novel disease-associated SNPs. Celera Diagnostics’ unparalleled whole-genome scanning capacity with its promise of discovery as well as subsequent patents of disease-causing SNPs only yield the statistical odds of those SNPs occurring in a disease condition. There are still gaps in our knowledge of how to further elaborate the SNP constellations and thus predict a healthy person’s genetic predisposition to disease. The feasibility of using SNP-based genetic tests to predict the occurrence of complex diseases is currently in dispute within the scientific and clinical communities. In this context, Celera Diagnostics’ current discovery efforts do not necessarily warrant assumption of the practical utility of the SNP constellations in creating diagnostic predictor kits. Throughout these penetrating interviews, Rabinow urges the readers to formulate their own opinions regarding issues such as the differences between monogenic and polygenic diseases and the utility of multiplex modeling in developing diagnostic tests based on functional SNPs.

Rabinow’s fascinating chronicle ends in 2003, at which time Celera Diagnostics became operational. Whether or not Celera Diagnostics can advance SNP-based diagnostics to realize targeted medicine in the future all depends on its progress in the race to unravel the SNP constellations and ultimately to successfully configure predictive diagnostic kits. However, even now in 2005, it still remains for the company to deliver on its promise. Nevertheless, this biotech chronicle not only appeals as a stimulating bedtime read but also serves as a unique historical account of Celera Diagnostics.