The past decade has witnessed an explosion in studies — both clinical and basic science — examining the relationship between the microbiota and human health, and it is now clear that the effects of commensal organisms are much broader than previously believed. Among the microbiota’s major contributions to host physiology is regulation of the development and maintenance of the immune system. There are now a handful of examples of intestinal commensal bacteria with defined immunomodulatory properties, but our mechanistic understanding of how microbes influence the immune system is still in its infancy. Nevertheless, several themes have emerged that provide a framework for appreciating microbe-induced immunoregulation. In this Review, we discuss the current state of knowledge regarding the role of the intestinal microbiota in immunologic development, highlighting mechanistic principles that can guide future work. 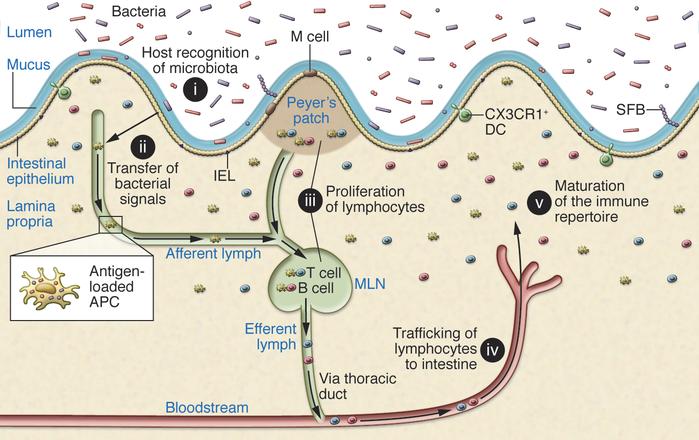 A portion of the small intestine is depicted. The majority of the microbiota are luminal, some organisms reside in the mucus layer, and only a few bacteria adhere to the epithelial surface. Immunogenic signals from the gut flora are recognized by the host (i) and transmitted across the epithelium (ii). In a process likely involving APCs, these signals reach the secondary lymphoid organs, where APC-lymphocyte interactions result in lymphocyte proliferation (iii). Lymphocytes leave the mesenteric lymph nodes (MLN) through the efferent lymphatic vessels, go through the systemic circulation, and migrate back to the intestine (iv). The resulting intestinal lymphocytes disperse throughout the lamina propria and intraepithelial layer and reflect the mature immune repertoire of the intestinal immune system (v). IEL, intraepithelial lymphocyte.